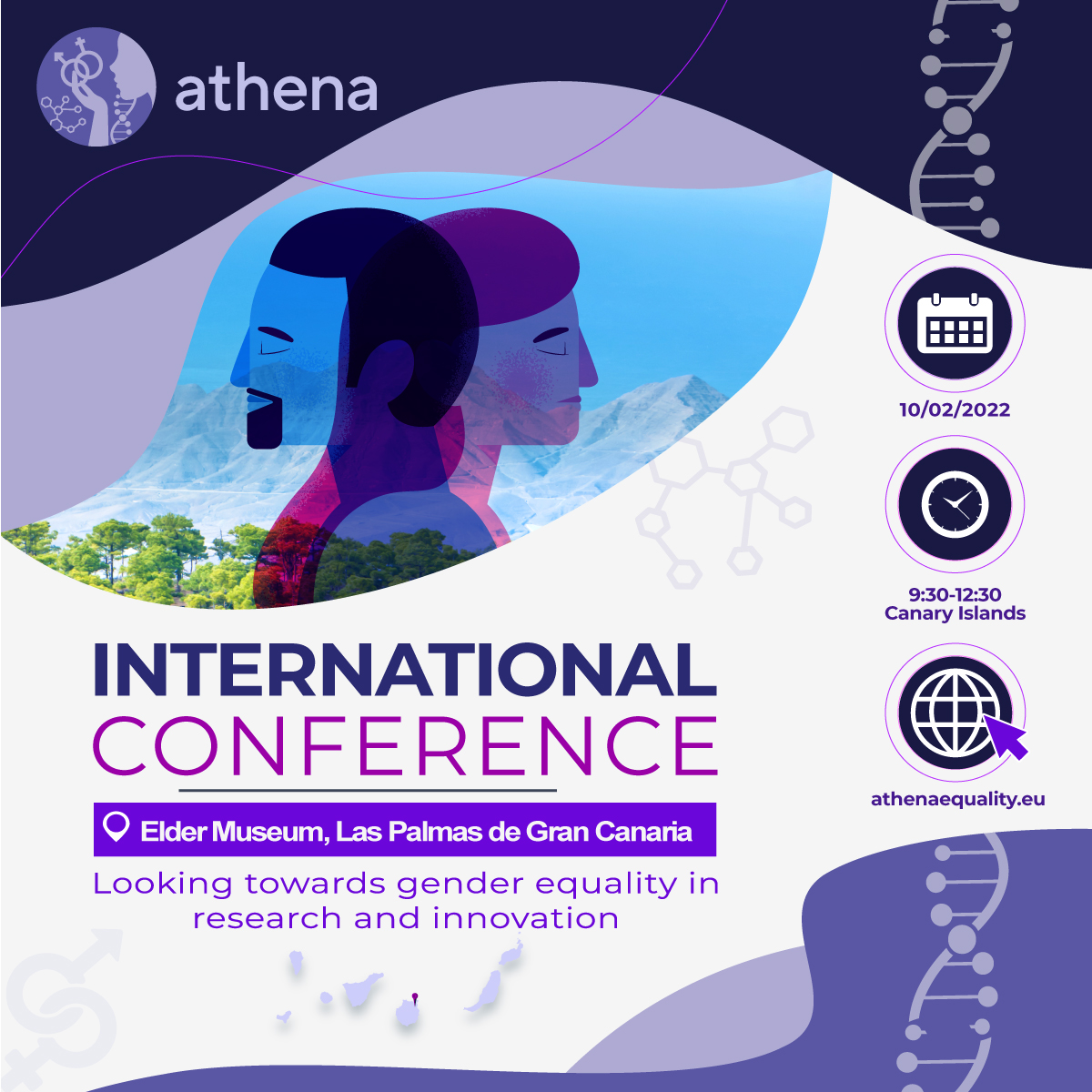 Friday, February 4th, 2022.- Gender equality to unlock the potential of research. With this motto, the European project ATHENA is presented, an initiative that seeks the implementation of gender equality plans to promote research with a gender perspective in entities dedicated to this field and in organizations that finance it in Europe. This project is financed within the framework of the H2020 program (currently Horizon Europe), although it is coordinated by a Canarian SME. “We are proud to host this first international conference in the Canary Islands, which precisely seeks to contribute to gender equality in research and innovation through this project that will end in 2025”, underlines Michelle Perello, CEO of Consulta Europa and coordinator of ATHENA.

In addition to several members of the project consortium, Sylvia Jaén, Vicecounselor of Equality and Diversity of the Government of the Canary Islands, will be at the opening ceremony. She claims that it is not only necessary to guarantee the presence of women in Science, but also the living in equality in the space of Science, “it is necessary to establish a new paradigm that allows collecting data that do not only measure equality in the workplace but that women, and people in general, are able to decide free from sexist stereotypes.”

Likewise, on behalf of the Government of the Canary Islands, the director of the Canary Islands Institute for Equality, Mónica Fumero, will also participate in the event, with the presentation “Women with science in the Canary Islands”. In spanish, it plays with the words “con” (with), “ciencia” (science) and “conciencia” (awareness) to talk about Women “con-ciencia”. “We need to promote an egalitarian and realistic scientific culture among Canarian students, bringing closer to students the legacy and the role of women who have developed and are currently developing their professional field within the scientific field, showing those who were left out of universal scientific history”, says Fumero. On behalf of the regional government, the Canarian Agency for Research, Innovation and Information Society of the Government of the Canary Islands also participates as a partner in the project.

The opening ceremony will also feature the participation of Sara Ramírez, Counselor for Equality, Diversity and Transparency of the Cabildo de Gran Canaria, who believes that gender equality should be promoted from society itself, without forgetting strategic fields such as research. “Many times it is the society itself that reaches where the administrations do not reach, we must seek among all people a more inclusive and egalitarian island”, emphasizes the ATHENA coordinator.

At a regional level, the University of Las Palmas de Gran Canaria is also represented in the project consortium through its Equality Unit, directed by Carolina Mesa, who will speak precisely about «The path towards gender equality at the ULPGC and the renewal process of the Equality Plan in the Canarian university«. In fact, during the event, women researchers will take part to tell their story, such as Beatriz González López-Válcarcel, a professor at the ULPGC who will take part to present her experience as a researcher. Likewise, the project has also promoted an online platform to make women researchers visible.

The ATHENA project is committed to fighting for gender equality, mitigating barriers to recruitment, retention and career progression for female researchers, as well as addressing gender imbalances in decision-making processes. ATHENA offers and implements gender equality plans in 8 Research Organizations (RPOs) and Research Funding Organizations (RPOs). The objective of this European initiative promoted from the Canary Islands seeks to guarantee that all people, regardless of their sex, have the opportunity to express their potential in research, thus forging an innovative, competitive and prosperous European society.

A LOOK ON HOW TO REDUCE THE GENDER GAP IN RESEARCH

Among the interventions that will take place this Thursday from 09:30 onwards at the Elder Museum, topics related to the “Challenges of gender equality in research and innovation from Europe to the Azores” will be discussed. This presentation will be given by Paulo Fontes, visiting associate professor and researcher at the Center for Humanistic Studies of the University of the Azores. Furthermore, Laura Grunberg and Irina Costache (University of Bucharest) will give examples of good practices on transformative measures of gender equality plans, and there will be debates on factors that influence the participation of girls in STEM education, moderated by Valeria Payán, president of the Iguálate Association.

Another of the entities that will participate will be the Opciónate Association, whose coordinator, Ana Lydia Fernández-Layos, will illustrate how research and digital tools promote gender equality. As part of the conference, it is planned to make the stories of women researchers visible. In this sense, Beatriz González, PhD in Economics and professor of Quantitative Methods in Economics and Management at the ULPGC will speak about women and scientific economics, while Joanna Rudawska, professor at the Jan Kochanowski University in Kielce and member of the consortium of ATHENA will stimulate debates around women and R&D&i, highlighting examples of startups, spinoffs and spinouts. Finally, a social dialogue focused on how to close the gender gap will be promoted. The conference can be participated in telematically.